When most of us think of World War II, things like Nazis, Pearl Harbor, Stalingrad, Normandy, and Hiroshima come to mind – all against a backdrop of ships, tanks, airplanes, and, of course, men.  However, there has been a forgotten dimension of the war tucked somewhere in between battle and death: American women and their sacrifices for victory.  When the war ended, our country heaped praise on returning soldiers but allowed the contributions of the Women Air Force Service Pilots (WASP) to sadly slip into obscurity.  The ALC and National WASP WWII museum are now partnering together to better preserve that history for future generations through digitization. 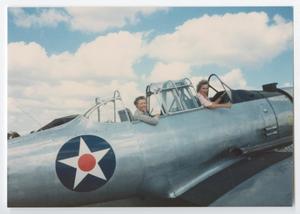 Two Women in an AT-6 Aircraft.  Photo from the archives of the National WASP WWII Museum.

As demands and challenges of WWII highlighted the need to free more pilots for flight combat, 1074 courageous young women were selected to join an elite organization created to train them as Army pilots. With a goal to fly domestic routes for the Army Air Force, the women attended classes and trained at Avenger Field in Sweetwater, Texas from 1942-1944.  In addition to ferrying planes, WASPs also piloted bombing training missions, pulled aerial targets in live fire target practice, flew simulated strafing missions, and dropped tear gas and other chemicals on ground troops during training exercises.  Several pilots went on to fly top-secret missions and test-fly rocket and jet propelled planes.

The women were considered civilians but were expected to live by military rules.  38 WASPs died while flying for their country but their families, not the Army, were responsible for arranging their funerals.  WASPs were also not given the status of “veteran” after the war until 1977. Yet the WASPs’ courage and influence on the future of women in the military lives on.

Through a grant from the Institute of Museum and Library Services and the Texas State Library and Archives Commission, the ALC and the National WASP WWII Museum are bringing the history of the WASP to the West Texas Digital Archives and the Portal to Texas History.  WASP documents, correspondence, photographs, and journals depict a new age of American women entering the male dominated world of aeronautics.  The ALC and the National WASP WWII Museum hope to honor the lives of all WASPS through preserving their legacy as pioneer women pilots.